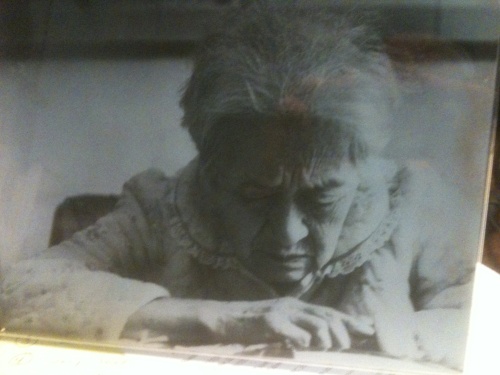 This is Kyung-In Lee. I’ll be writing about her soon. She’s praying in this photo, which she did every morning before preparing breakfast for her husband and seven children. Kyung-In lived in Seoul through the Japanese occupation of Korea, World War II and the Korean War. Her husband, a minister, was imprisoned by the Japanese and later killed (the family presumes) by North Korean communists following the invasion of Seoul. Kyung-In lost four children to war and disease. Her oldest son became a communist. She sent four of her children to live in America, placing them on American cargo ships in Pusan harbor. She lived much of the latter part of her life as a refugee. Her youngest son, Hi-Dong, told me he sometimes found her praying while holding a handkerchief wet with tears. That is the through-line in Kyung-In’s life: prayer. “I used to wake up at night and find her praying,” Hi-Dong told me. “I came home from school and found her praying in a corner of the living room….Through prayer she found strength to go on through the dark valleys of death and separation.” Kyung-In joined her children in the U.S. in the early 1980s. She died in 1987 at age 93. She is buried in Los Gatos, California. Her headstone reads: “She loved unconditionally.”